The Varroa Mite: Know Your Enemy By Josh Vaisman – Honey bees currently face three difficult challenges to their survival — a lack of quality nutrition, ubiquitous pesticides in the environment, and the scourge of the varroa mite. Beekeepers can have some positive impact on the lack of nutrition by planting bee-friendly flowers and encouraging others to do the same. We can also reduce or eliminate our own use of chemicals in our environment and educate friends and family to do the same as well. The greatest opportunity for impact, in my humble opinion, comes in the form of varroa mite management in our bee hives.

In this article, I’ll discuss the basic life cycle of the varroa mite and how long varroa mites live, how these pests have such a powerful negative impact on honey bees, and a brief overview of testing and mite treatments.

Varroa destructor (its scientific name) are tiny arachnids that evolved alongside the Asian honey bee. At some point, it “jumped” to the European honey bee with devastating consequences. Among the pests found in beehives (such as mice, ants, wax moths, and hive beetles) varroa mites are, in my opinion, the worst.

There are female and male mites. The female is significantly larger than the male though neither get much bigger than the head of a pin. Males are typically white while females are red.

Varroa exist in two stages — phoretic and reproductive. During the phoretic stage, the female mite feeds on adult bees for between five to 11 days during brood rearing times. When there is no brood present, mites remain in the phoretic stage semi-permanently. As they tend to prefer the ventral (belly) side of bees, phoretic mites often avoid visual detection by the beekeeper. From time to time, the beekeeper may see a phoretic mite on the dorsal (back) side of a bee, though the general rule of thumb is, “If you see mites, you have too many!”

The reproductive stage occurs entirely under capped brood. Just before a bee larva is capped, a female, phoretic varroa mite sneaks into the cell and hides beneath the larva. After the bees cap this cell, the mite attaches itself to the larva/pupa and begins to feed on it. About three days later, the female mite will start laying eggs. The first egg she lays is unfertilized and will become a male. Every egg thereafter, laid approximately 30 hours apart, will be fertilized and destined to become female mites. As the daughter mites emerge they will mate with the son mite and slowly mature to adult form. When the bee pupa becomes an adult bee and emerges from the cell, the original mother mite and any mature daughter mites will emerge as well and continue their life cycle.

Varroa mites prefer honey bee drone brood to reproduce. As drone brood take roughly three days longer than workers to mature and emerge, it provides the mites an opportunity to lay more eggs and have more daughters mature. In fact, in drone brood, mites can produce between two to three times more mature adult daughters than in worker brood.

If left untouched (by treatment or bees biting them off) in the colony, mites can live for weeks or even months.

How Does the Varroa Mite Kill the Colony?

Recent research suggests the varroa mite feeds off the fat bodies of the honey bee. This has at least three significant negative impacts on the bee. First, during the reproductive stage the mother, son, and daughter mites feed off the bee pupa they are growing alongside it. This weakens the pupa during its most critical growth phase resulting in a “less than healthy” adult bee. Over time, this has a negative impact on the entire colony as the mite population grows. Second, during the phoretic stage, the mites are feeding off adult bees and slowly them. As these are the bees charged with caring for the hive from brood rearing to foraging for resources, one can imagine how this has a cumulative negative effect on the colony.

Lastly, the bees’ fat bodies are a critical physiological component to winter survival, especially in a climate like Colorado where I live. The mite population grows alongside the bee population. In late summer, the bees begin slowing down brood rearing and reduce the size of the colony. The mites, however, continue reproducing. This disproportionate increase in mite population occurs right when the bees are rearing the “Winter Bees.” The result is weak winter bees unable to survive the many months of winter cold and dearth.

All the above would be bad enough but the mites don’t stop there — they also transmit several viruses to the bees. One virus, deformed wing virus (DWV), is common in bee hives with high mite populations. DMV results in bees with unformed or deformed wings leaving them unable to fly. They are otherwise fully functional so they move through the stages of life within the hive like most other bees. However, when it comes time to leave the hive and fly, they fall to the ground, crawl off, and perish. Unable to become foragers, they must be replaced by another bee within the colony. This constant “changing of duties” means fewer and fewer bees inside the hive caring for brood, building comb, defending the hive, or other important duties. Eventually, the colony collapses.

It’s pretty clear that the survival of our honey bees depends on a considered approach to varroa management. Testing for mite populations can be an important tool in such management.

There are two common methods of testing for mite loads — natural drop and sugar/alcohol rolls. For the natural drop test, place a white sticky sheet on the bottom board of the hive. After 24 hours, pull the sheet and count the number of mites that have fallen to the bottom of the hive. In a large colony (10 frames of bees or more), if the number of mites exceeds 40 it is time to treat. In a small colony, if the number exceeds 20 it is time to treat.

For the sugar/alcohol roll place about 300 bees from the brood chamber in a jar and roll them in powdered sugar or alcohol. This knocks the mites off the bees. The beekeeper can them dump the mites on a white sheet or plate and count them. The rule of thumb is, if the mite count exceeds 3% percent (nine mites per 300 bees), it is time to treat. You can learn more about how to perform this test here. My personal recommendation is to do this test on at least three different brood areas to get as accurate a count as possible. In my humble opinion, testing is unnecessary. Due to natural mite migration, even a colony that has zero mites today will have many mites tomorrow. In fact, one mite in a colony of Colorado bees on January 1st results in more than 1,300 mites by the middle of summer! Because of this, I’ve stopped testing and created my own Varroa mite treatment program resulting in zero colony losses for over two years.

My wish is for you to complete this article having a greater understanding of the varroa mite and a strong appreciation for the deep challenges it provides our beloved honey bees. What will you do help your bees flourish in a world with mites? Can I Check Honey Supers While Treating with Formic Pro Mite Treatment? 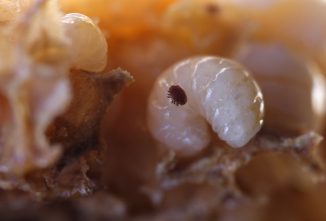 One thought on “The Varroa Mite: Know Your Enemy”